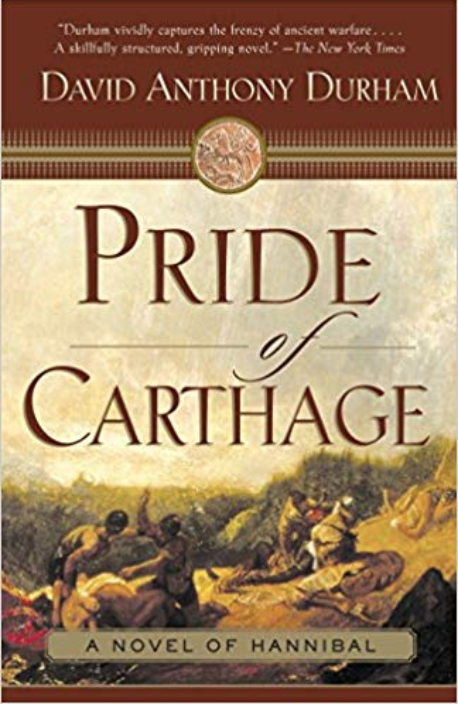 As far as I know, there aren’t a lot of studies concerning the subject matter of historical novels published in English. If I had to guess, I would say the majority of historical novels deal with either the Roman Empire or WWII. Considering how many books are written on these subjects and how much I read historical fiction, some might assume that I have read a great many novels featuring characters with Latin names or events that took place somewhere between 1933 and 1945. Such an assumption, however, would be wrong. Partially because so much has already been written about these epochs and partially because we learn a great deal about both in school, I used to avoid historical novels dedicated to these topics. I decided to break that rule when I read David Anthony Durham’s Pride of Carthage and I am glad that I did.

While a great many novels have been written about the Second Punic War, Pride of Carthage is one of the few novels I know that is told almost entirely from the perspective of Carthaginian characters. This does offer some advantages in terms of brand differentiation but there is one big downside to telling the story from this point of view: the Carthaginians were the invaders. Generally speaking, the people who initiate wars of aggression are not very sympathetic characters. Whether the story takes place in Winterfell or pre-Columbian North America, creating sympathetic characters is key to capturing reader interest so telling the story from the Carthaginian perspective poses some obvious difficulties.

Durham confronts the challenge with impressive grace and portrays Hannibal Barca in a way that helps readers understand his intelligence and his motivations. Considering Hannibal’s reputation as a genius military strategist, a great many writers probably would have been tempted to use the first chapter to showcase his knowledge of battle tactics. Durham, however, chooses a different tack and uses the first chapter to showcase Hannibal’s genius as a military commander. The scene is not very long but does a great job of showing how Hannibal was able to win the loyalty of common soldiers and why so many soldiers were willing to follow him into such perilous straits.

When it comes to understanding the motivations of this long-dead general, no scene does this better than Imilce’s private conversation with Hannibal. Imilce, his first wife and his ardent supporter, pushes him to explain why he is so keen on war with Rome. His initial answers are rather milquetoast—glory, justice, freedom, and vengeance—and could have come from the likes of Hirohito or Bolivar. The scene gets truly interesting when Imilce presses Hannibal and he confesses he is motivated more by marital pride than martial pride. He promises his wife that “in two years you will be able to look from the balcony of this [room] or any other place you choose and know that all the Mediterranean world is yours to shape. How many men can say that to their wives and mean it?”

This explanation differs markedly from his more public proclamations—at one point in the book, he explains that Carthage needs to take the offense against Rome because Rome will become the undisputed hegemon of the Mediterranean otherwise, a rather prescient observation undoubtedly informed by Durham’s knowledge of the Punic wars—but this private admission is the one that truly stands out. To think that something so simple and pure as striving to give a significant other something no one else has can lead to something so ugly as war is both fascinating and horrifying.

Considering the book is about Hannibal Barca, no reader should be surprised that large-scale battles play a large role in the story. Personally, I like the descriptions of the Fabian campaign, the Battle of Cannae, and the Battle of Zama best but the answer will probably differ from reader to reader. To be fair, there are probably some readers who won’t enjoy these scenes at all but the political intrigue and the narrative arcs are more than enough to carry the story along. I recommend this book to anyone interested in Mediterranean history, albeit mainly from the African perspective as opposed to the European perspective, or to anyone interested in military fiction.

The novel is available on Amazon and in most libraries.